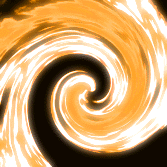 Released in 1997, the 2nd single from the album 'ESP'. It includes  total reworking of the classic first single into a pulsating trance monster as well as two exclusive trance remixes of "Rhythm Of Life", the original version of which appears on the album ESP. Limited pressing on 12" only.

"Excellent trance. A real light, morning track that drifts and uplifts you from a heavy night before. Subtly dragging you back into a tranced out state - without overdoing it" Gulfin

'.On the A side the Biorythmic mix of Rhythm Of Lifethrows in hints of breakbeats and builds in pace over fragrant melodies, while keeping an easy hypnotic feel. The 101 Acid remix is subtler but builds into more full layers later in the tune. Nemesis is a steady chillout number sliding in trippy trills and psychedelic beats, Two early morning chill tunes. 7/10' Wax

'Three track 12" of trance. There's 2 trance mixes of Rhythm Of Life which are pretty good but a little similar and a brilliant new deep trance mix of Nemesis; just when you thought the tune had been remixed to death here comes another top rendition.' Sexual Chocolate

'Don't know anything about this triple tracker which on one side are two tracks of fast European styled trance with a light feel. The other side is slower, with thue usual sythny and oscillating wibbles and is a nice hypnotic dose of trance. Nice 7/10.' Mixmag