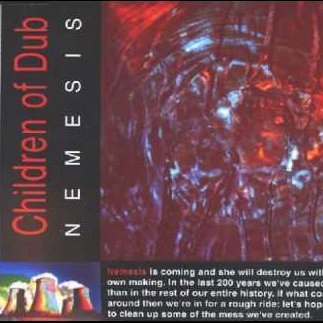 Released in 1995, the debut single. It was inspired by the increasing environmental destruction that we now refer to as 'climate change'. Nemesis is the Greek goddess of retribution, against those who exhibit hubris. 25 years after this recorc was released she has finally arrived.

Features some classic trance and house remixes by DJ Monkey Pilot of Whirl-Y-Gig, Bumpy Capers, Cyberia and Children Of Dub. Went to the top 20 in the UK indie chart, deleted in 1996 but a few remain on CD only. The vinyl is long sold out and deleted.

Reviews:
"A top club sound frpm the fairly new Diversity label. This band belong with Banco De Gaia, Pipe Of Justice and EatStatic. It's going down real well on the dancfloor at Prisoner HQ and the 12" remixes from Monkey Pilot, Bumpy Capers and Cyberia. It's ambient, it's trancey, EEEzie listening.' The Prisoner

'Remixess from The likes of Whirl-Y-Gig and Cyberia crews, amongst others of this popular track from these dubby trance masters and festi faves.' Global Trance

'Another experience provided by the Children Of Dub. Foour mixess on the 12" including a Whirl-Y-Gig groove session and a Cyberia techno box. The Bumpy Capers Mix is probably the most club oriented and will definitely give your crowd a stir. Different and diverse so try it for yourself.' Mixmag

'Combing electronics with live instruments, Children Of Dub delve into the territory of Dub Reggae, House and Ambient mixes.The new 12" contains mixes by DJ Monkey Pilot of Whirl-Y-Gig' The Beat