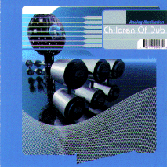 Released in 1997, this continuous mix compilation album created specially for the US, Japan and Canada (released on Hypnotic Records), featuring remixes and tracks formerly only available on 12". This album was not be released in Europe or the UK. It is only available on CD in Europe as an import or online, although it might be deleted now.

"This album seems to consist mostly of remixes of previous works by the Children of Dub. Though it lacks the personality of an actual album release, it makes up for this greatly by having very streamlined production. On "The silent pool" they still had a rough around the edges sound, but have now evolved greatly. The remixes on "Analog Meditaion" are very expansive, intriguing, thought provoking, and enjoyable to say the least. It is a very mysterious and timeless sound. Children of Dub is music to get happily lost in. The only letdown I have in this album is that I can't find more music like it. "Analog Meditation" has spoiled me."  Miyamoto Musashi (Japan)

NO LONGER AVAILABLE  IN PHYSICAL FORMAT (except 2nd hand)