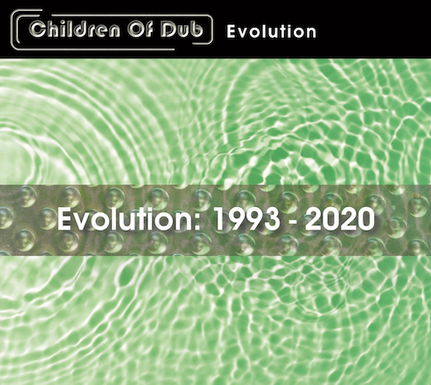 • Be The Solution • Theme For The Cities (House Mix)

• Fallen Angel (Original version) • Stay With Me • Move On

Re-issued in 2020 and repackaged with a gatefold cover, now featuring 2 CDs instead of 1 with over 150 minutes of music, this collection now includes 6 exclusive tracks and more rare and deleted tracks from 12" singles and compilations albums.

Evolution 1993-2020 is a compilation of some of the best work of Children of Dub, includes 25 tracks off all of the 12" and CD singles, a handful of album and compilation tracks plus several previously unreleased tracks. This album brings together the best of the dance tracks produced over their entire career.  EDM: consisting of trance, house, old-school, psytrance and ambient dub.

Released on 2xCD and digital formats, on 6th November 2020.
Available from us here on CD (signed copy) with a free bonus CD single (until we run out).

"Children of Dub are a band who skilfully unify digital technologies with organic structures and thus produce music which can be only described as timeless... Their style, due to the many changes in line-up, is diverse and cuts across house, techno, trance, breakbeat, and of course the grandfather of it all, dub. As such, Evolution provides us with a comprehensive coverage of how Children of Dub have developed over the years, and provides a fantastic introduction to those who are new to them and a must-have for those that are already in the know." Upfront

"Released 8/01 on Rumour Records. Evolution is an excellent summary of the COD discography, tracing a journey of how their sound has evolved through squiggly, dubby electronica, trance, break beat and drum 'n bass. It is compiled from many rare and unavailable / deleted COD EPs and vinyls, rather than a hand picking of tracks from their past five albums. Hence Evolution is more than just a "best of..." album and is an essential purchase if, like myself, you missed many of these releases first time round." global-trance.co.uk

'Quite simply C.O.D. were at the forefront of the UK's progressive house and trance scene... Tracks such as Nemesis, Om and Greed proved that the bnad could happlily mix house beats & acid squggles alongide breakbeats, live bass, live guitar and drums with elements of other genres. C.O.D. were not afraid to push the boundaries and their extensive live work allied to their studio output gained them respect throughouut the UK, Europe and America, resulting in adulation from both the underground and mainstream press. Two of the bands biggest supporters have been John Peel and Annie Nightingale. ' Dream

'Evolution 1993-2020 is repackaged with a gatefold cover, which is now featuring 2 CDs with over 150 minutes of music, this collection now also includes 6 exclusive tracks and even more rare and deleted tracks from 12" singles and other compilation albums.Evolution 1993-2020 is a compilation of some of the best work of Children of Dub, it includes 25 tracks from all of their 12" and CD singles, a handful of Album and compilation tracks plus several previously unreleased tracks. This album brings together the best of the dance tracks produced over their entire career.' Journal of Music