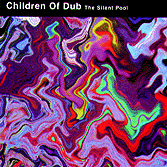 Track listing : Journey To The Inner Light • Waves Of Dub

Released in 1995, the debut album features versions of the singles Nemesis and Transcendental plus 9 other tracks, reaching 14 in the UK indie chart. It is a seamless journey through ambient dub moving up into progressive house and back to indian flavoured ambience. Features Demian Castellanos (guitar) and Katie Hecker (percussion).

Finally, in 2012 it became available to buy online. We have a few copies on 2xLP and CD left and hopefully a re-issue my happen in the future.

"There will come an hour in my life when this is the only music I can listen to… Sometimes wallpaper sings to me, and this album is a compilation of some of its favourite tunes" The Idler

'We have road tested this Lp extensively and in several different recreational situations, This album has performed excellently under all conditions.. It is a selection of sounds guaranteed to further stimulate the endorfin levels at any time - day or night.' Brumbeat

'A lovely testament to live musicianship in the dance arena offering heaps of percussion , a singing sitar and much trance revelry... This album won't fix what's broken but it's a welcome distraction' Generator

'Interesting release available from C.O.D., who are on a mellow house/trance tip., mellow ambient stuff.' The Prisoner